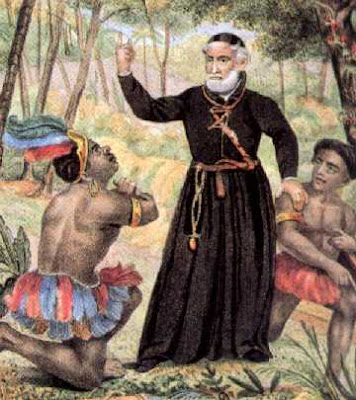 Antonio Vieira was born in Lisbon in 1608 in a modest family. When he was 7 years old the family moved to Bahía (Brazil), where he studied in the Jesuit College. A few years later he was already teaching Rhetoric in the same college and later on received the priesthood.
Vieira was an excellent orator and the opportunity of his sermons as well as the dignity of his language made him famous. In 1641 he accompanied the viceroy’s son to Portugal, where he impressed King John IV. Soon he became the royal preacher and the king often consulted him on the business of state. He defended some revolutionary measures to improve the economy, like the creation of companies of trade founded in the power and knowledge of the New Christian. To make it possible he proposed the abolition of the distinction between Old and New Christian, the reform of the Inquisition and the admission of Jewish traders with guarantees of their security. He also played an important role as a diplomat. His ideas and success made him gain enemies on all sides. He was close to be expelled from the Society of Jesus.
In 1652 he returned to Brazil and continued the mission of Christianization he had interrupted for a few years. To reach the native Indians he learned 7 native languages. A new struggle started when he defended their liberation from the slave work and when he obtained from the king a series of decrees that placed the missions under the Company of Jesus and himself as their superior. Due to his actions he was expelled from Brazil and returned to Portugal in 1661. The king, his main protection, had died in 1656 and Vieira was arrested by the Inquisition for two years, accused of heresy due to one of his famous books. In 1669 he went to Rome where he was again successful as a preacher close to the Pope and became confessor of Queen Christina of Sweden (protector of Descartes). The Pope requested him a report on the Inquisition in Portugal that led to its suspension for five years. Vieira was exempted from the jurisdiction of the Grand Inquisitor, returned to Portugal and then to Brazil, where he died in 1697.
His literary legacy is very vast, including around 200 sermons, numerous reports, letters and documents about politics, diplomacy and religion. Among the most interesting are those connected with his struggle against the brutality of the Inquisition and the slavery of the native Indian.
By Margarida on 11.2.08

A Touch of Lisbon - our site